And way more than you think!

The extent to which laughter is good for you

It’s a well-known fact that the benefits of laughter are real!  The number of studies focusing on the subject and the list of benefits is long and compelling..

There are also social functions for laughter, which allow you to more easily connect with others and integrate into the group. Laughing helps you to have more self-confidence and to express yourself while contributing to your emotional equilibrium.

In March 1995 Dr. Madan Kataria, a general practitioner in Mumbai, India, was writing an article called “Laughter – The Best Medicine” for a magazine he published in his community. His research lead him to discover a stunning amount of scientific publications showing the benefits of laughter on the human body and spirit. He was especially interested by the book of an American journalist called Norman Cousins “Anatomy of an Illness” in which Cousins links his recovery from ankylosing spondylitis to laughter.

Several studies caught his attention, among them were those by Dr Lee S. Berk who mentioned that laughter reduces stress levels in the body and impacts the immune system.

Knowing is great but doing is better. Kataria decided to experience and benefit from this seemingly powerful activity. He recruited a few people to join him in a public garden where he started the first laughter club.

With the help from his wife, Madhuri, a yoga professor, he developed techniques that combines deep breathing, stretching and fun exercises that stimulate laughter. Laughter yoga was born! 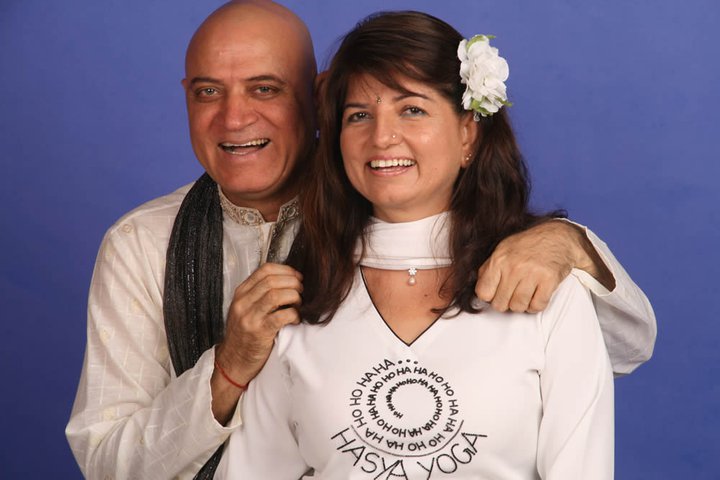 Want to know more? Send us your question!

ONCE YOU TRY IT, THERE’S NO GOING BACK!

Considering one of our programs for your team or group? You’ll laugh, it’s guaranteed!

Write to us to receive free tips and joyful news

people contaminated with the Happy Virus because of the School of Laughter Yoga!